Difference between revisions of "Gatekeeper"

An updated version of this documentation is at [[1]].

Gatekeeper is a Python script that opens a gate when calling to +32 (0) 484 73 95 88 . It only opens the gate for whitelisted numbers. The hardware consists out of the Dooropener system:

The gatekeeper script can be found at /opt/gatekeeper/gatekeeper.py and is started at boot. It is located on the Gatekeeper (172.22.32.14) server.

The whitelist file uses the folowing syntax and is located at /opt/gatekeeper/whitelist. If a line with the wildcard character '*' is present the gatekeeper operates in public mode: every call from any number opens the gate.

To deamonize the python script this library is used: http://www.clapper.org/software/python/daemon/ and not the ubuntu package python-daemon, just for kicks.

The script is started on (re)boot using the cron facility available in ubuntu. Using sudo crontab -e you can see the current configuration. For some reason the script crashes sometimes and is restarted every 30 minutes. Root cause diagnostics needed!

Connecting to the BeagleBoard

The beagle board runs a debian based distro so it can be used as a general purpose server. If you want to do something with it ask for a login and sudo rights. Connecting with the board is possible using ssh. Internally it has 172.22.32.11 as IP address, ssh on port 22 (default ssh port). Externally it is accesible with ssh on hq.0x20.be, port 2222.

The lease of the space gives us three remotes to open the gate. We're coming up to 20 members now. So we decided to take one remote, mount it in reach of the gate and hook it up to a computer with a huawei modem. The idea is: you call the number of the modem, it checks the caller id against a text file, and if it's in there it switches the remote. Best of all: 'just letting it ring one time' doesn't cost money and opens the door. It's democratic because all our members have a cellphone, not all have a smartphone.

All hardware will be divided in three cases: 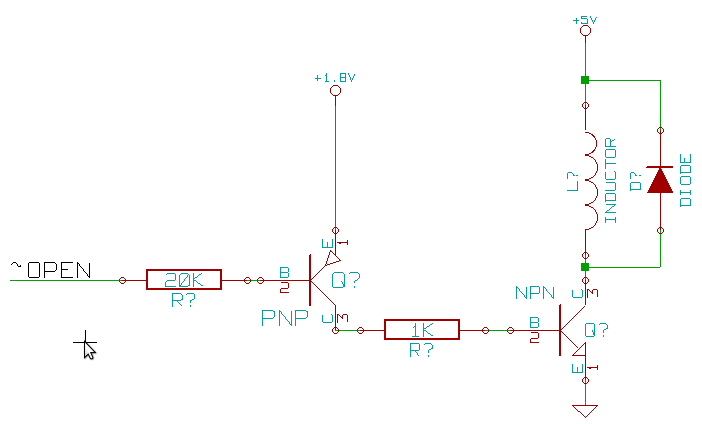 The current circuit is a PNP transistor that, when base goes high (+5V), connects the Terminal PSU to a relais in the junction box that turns on the remotes (as if its buttons were pushed). Since we migrated from the beagle board to the Launchpad only the right half, From the 1K resistor on, of the diagram is used. 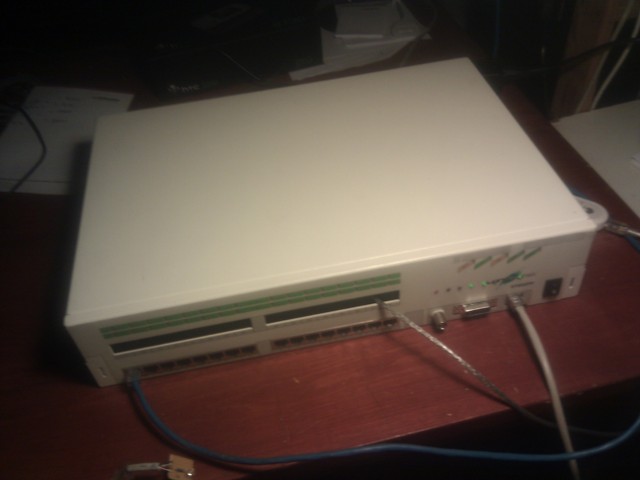 The original Lantronix PSU can be reused. It gives the following outputs on a 6-pin molex:

Pinout on the Launchpad towards the gate opener:

On the RJ45 connector is present:

An old ATX PSU was used. One of the 4 pin connector was replaced with a 3 pin version to server our purpose.

The current version has three control leds build right in the power distribution/Launchpad box. When the system is on both leds on the right should be lit. If this is not the case the system will definitely not work. In this case the first thing you should check if the PSU is properly connected. When an authorized phone call is being received the red led on the left will blink. 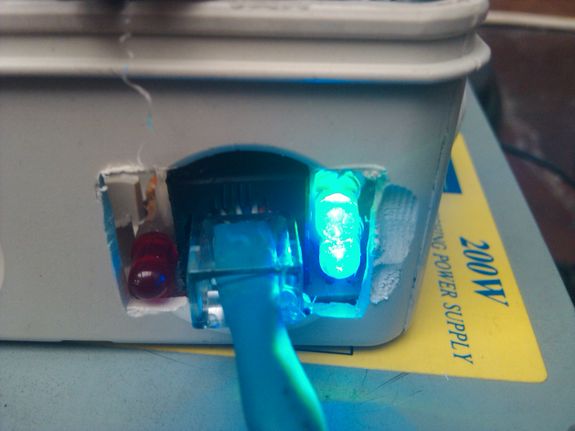 Simply a RJ45 male plug with a led attached to the brown pair. To be inserted into the connection of the remote. Allows developing software and hardware and testing the door without actually making the door go open. When the led is on, the remote is pressed. 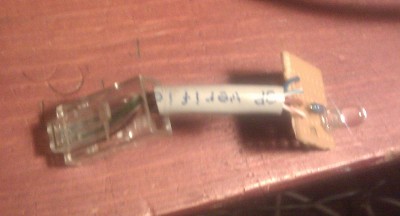 Similar to the previous version this can be used for software testing. In addition to the first version is will also show if both supply voltages are OK. Bottom right clear red led indicates if 5V DC is OK, the bottom left clear led is for the 12V DC, The top regular red led is only lit when the signal is being send. (A income call is received.) 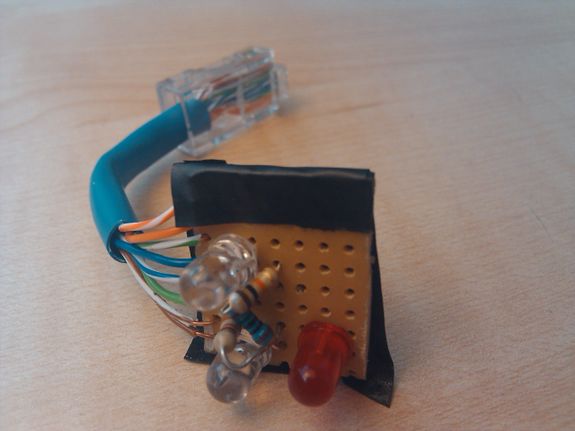 Software running on the launchpad, providing 2400bps connection over usb, send u to open gate for +/- 1 sec, d to force close the gate.

You are outside, you have a key for the door of the space but no fancy-schmansy garage port opener.

Discussion in the end gave us some idea on architecture: 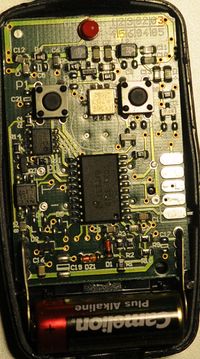 Template:Project This is the page with the reverse engineered information got out of the undocumented spinoff project which apparently has replaced Gatekeeper.

Help, Help, The Gatekeeper Is Borked!!

Change log of the maintenance performed on the Gatekeeper box, as well as the issue is resolved/created:

serial console goes past POST screen, GRUB started counting down, and reboots after the linux kernel is loaded without mentioning that it loaded the initial RAM disk.

Thing that fixed it